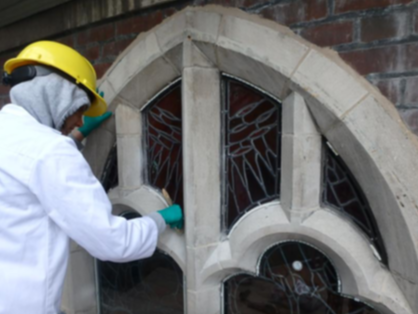 The Award of Excellence in Conservation – Materials, Craftsmanship & Construction was given to Eve Guinan, Eve Guinan Design Restoration for the St. Thomas’s Anglican Church, located at 383 Huron Street in Toronto. The judges described the submission as a great story; well-detailed, both technical and personal, as evident by its compelling images and thorough project synopsis. The judges were impressed by the high level of caution and the thoughtful approach by the glazier, showing an elevated level of skill and workmanship that made the  completion of the work almost effortless.

In 2015, Eve Guinan Design was commissioned to prepare a condition survey for the stained glass windows of St. Thomas’s Anglican Church at 383 Huron Street. Based on the recommendations provided, Eve Guinan Design was hired to do the restoration and conservation work on the Baptistery windows to coincide with the church’s centennial commemoration of World War 1. The stained glass windows of its Baptistery, purpose-built in 1919 to commemorate 35 parishioners who lost their lives in service to their country during World War 1, comprises of numerous architectural and decorative elements of great historical and aesthetic significance which warranted preservation in light of the recent 100th anniversary of the events which inspired their creation.

Using the condition assessment outlined by Eve Guinan Design as a basis, a schedule was initiated to restore and stabilize the overall structural integrity of the stained glass and the masonry component. The project was completed in the Baptistery in 2018. Today the restored windows of the Baptistery provide an example of the rich heritage worthy of preservation in Toronto’s architectural, cultural and liturgical history.